“These awards reflect the hard work, dedication and commitment to delivering an outstanding experience that is the hallmark of a UNSW education. I am delighted that Adrienne, David and Lynn have been recognised in this way. They are true champions of educational excellence and we are proud to work with them.”

Read the background stories of how their citations came to light:

Dr David Kellermann has been recognised for bringing higher education to the forefront of global technology with a deeply integrated, collaborative Artificial Intelligence (AI) driven and human-centred model preparing students for the modern workplace. 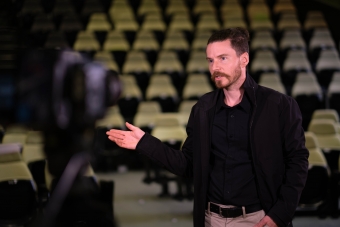 In 2016, Dr Kellermann delivered his first UNSW lecture of 500 Engineering students, and was concerned by the lack of collaboration, native digital technology and accessible/inclusive design of university lectures. Overcoming the technological limitations of learning management systems, Kellermann replaced a document scanner with digital ink, and eventually transitioned to using Microsoft Teams as his learning platform in 2017. This was a world first. Student satisfaction went from 75% to 99%, and class communication increased tenfold from 500 posts a semester, to 5000.

Dr Kellermann has been progressively developing this model of ‘collaborative learning’ over the years, with an unprecedented 100% students responding that they felt part of a learning community (student survey, 2018). In 2020 during the peak of COVID-19 which forced the rapid transition to online learning, Dr Kellermann was at an ideal teaching position. He pushed even further forward with technologies that have surpassed even his best on-campus student experience survey feedback: 100% satisfaction (student survey, 2020).

His interest in digital technology to help students learn, led to the development of a data driven and human-centred Artificial Intelligence that has been broadly adopted and open-sourced.

"The idea of a human-centered AI is actually to enhance the ability of people to connect with people rather than to replace human connection with a human-to-bot conversation."

Dr Kellermann's work has been recognised beyond UNSW. Among many awards and invitations to speak at learning and teaching events across Australia, he brought higher education to the international stage of the global technology industry where he was invited by the Microsoft CEO to share the stage at their biggest conference of the year in demoing how he uses Teams in the Classroom.

Watch the video of Dr Kellermann sharing his thoughts on the award and the future of higher education.

A/Prof Adrienne Torda has been recognised for creating and sharing innovative and effective tools to improve student engagement and critical thinking about medical ethics. 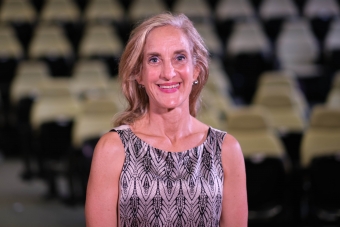 A/Prof Torda began convening the medical ethics part of the medical program curriculum at UNSW over a decade ago. At the time, the focus on medical education was starting to shift from primarily content-based to skills-based learning.

A pattern was recognised with junior medical students finding it difficult to engage with the content and grasp how important proficiency in medical ethics will be when applying medical knowledge to real clinical situations – there was a cry for innovative, consistent training in this domain. A/Prof Torda identified the need for critical thinking, and humanistic elements of medical care to be integrated all the way through medical school.

Taking a learner-centred approach, A/Prof Torda improved student engagement by updating the curricula and developed several innovative tools to address the learning needs at all stages of the program. An example was the creation of an online learning game, the ‘Ethics Cube’, to meet the technological preferences of first- and second-year medical students. The tool became the primary medical ethics tool for the entire six-year UNSW medical program.

"The Classie modules are very immersive - they are 3D and engage emotional elements as well as the content learning parts of medical scenarios. The modules are calibrated, high quality, and scalable. They were able to be adapted in other countries where students weren't able to see patients physically anymore due to COVID19."

These initiatives have been shared within Australia and across the globe and they have been recognised by multiple awards, fellowships and publications which greatly reflects the overall recognition of A/Prof Torda’s thought leadership.

Watch the video of A/Prof. Torda sharing her thoughts on the award and the future of higher education. 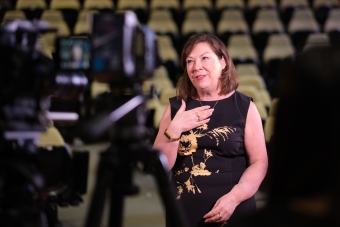 With over a decade of Management teaching experience under her belt, Dr Gribble joined late 2019 as a full-time Education Focussed academic at the UNSW Business School. The first time Dr Gribble taught Management online, she found that adopting the School’s usual approach of shifting courses online using text-based delivery betrayed the many business savvy yet academically unsophisticated students in her courses. Dr Gribble’s goal was to make her online teacher-learner interactions just as personal as face-to-face even in large classrooms, with a mindset that the diversity of her students’ learning needs would drive her diversity of innovations.

"I want everybody's learning journey to feel like it is taking them on their career and their choices, not a 'packaged experience' which they need to work out for themselves."

Dr Gribble located voice-recording tools ‘hidden in plain sight’ among everyday teaching technologies such as learning management systems and Microsoft Office tools, which were cost- and time-effective. By using voice recordings to soften, strengthen and above all customise her detailed feedback to students, Dr Gribble found the key to their engagement. By 2012 Dr Gribble was pioneering the use of Turnitin’s voice feedback feature, fundamentally changing her approach by focusing on feedback that asked questions of students, developing them as active, rather than passive receivers of feedback.

The use of technologies in her teaching continues to evolve with the introduction of tools that create safe spaces where anxious or reticent students can anonymously share their thoughts and questions. These tools gave her ‘invisible’ students a voice where she could gauge online the needs and feelings of the students just as she would look at faces and distractions in a physical classroom.

Dr Gribble’s efforts have been very well received with a high student satisfaction rate in comparison to other large compulsory courses, and consistent positive student feedback. As a result of her innovations, Dr Gribble has been recognised through many teaching awards at UNSW and beyond.

Watch the video of Dr Lynn Gribble sharing her thoughts about the award and the future of higher education.

If video not displaying below, click here to watch

If video below not displaying, click here to watch

If video not displaying below, click here to watch

Background of the AAUT and your chance to apply

Background of the 2020 Australian Awards for University Teaching

As the university sector, among others, became drastically affected by the global disruption of COVID19, an opportunity rose for educators to revisit their learning and teaching development in untapped areas of the digital realm. To recognise the extraordinary achievements and major adjustments to courses academics have made, Universities Australia (UA) decided to continue to offer its awards scheme for 2020.

The session will explore what’s involved in putting together a strong application for an AAUT Citation or Teaching excellence award​ for outstanding contributions to Student Learning and highlight the type of evidence you need to make your case stand out.

The PVCESE Academic Development team played a significant role in supporting the development of these award applications. View some of their professional development work here.